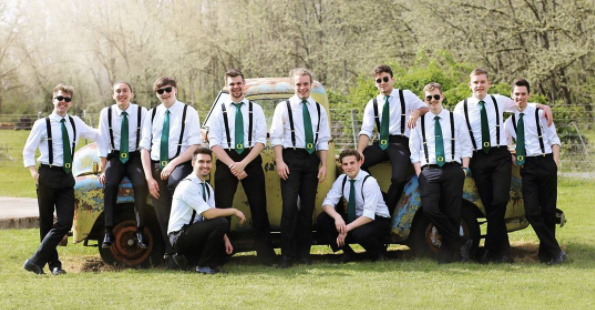 6 Guitars is a pitch perfect blend of music, comedy, and characters. Chase Padgett delivers a virtuosic performance as he becomes 6 different guitar players each with their own distinct voice, views, and musical style (Blues, Jazz, Rock, Classical, Folk, and Country). During this 85 minute show, each of the characters ranging from a 19 year old rock prodigy to an 87 year old blues man share their journey with music from discovery to mastery through songs and stories that leaves every audience laughing, crying, and falling in love with music all over again.

6 Guitars premiered in the 2010 Orlando International Fringe Festival where it was greeted with sold out houses and standing ovations. Since then is has traveled internationally, becoming one of the most successful shows from the Canadian Fringe Festival Circuit by breaking attendance records and receiving high praise from critics. In 2013 it became one of the top 5 highest grossing shows in the history of the Winnipeg Fringe Festival by selling nearly 3000 tickets in 12 days. In 2015 it broke that record with 3200 tickets. 6 Guitars has showcased at several Performings Arts Showcases such as Arts Midwest, Pacific Contact, Contact East, and more.

Sonos Handbell Ensemble is well-known for their creative handbell music all over the world. Located in Berkeley, California, this handbell ensemble travels all across the United States, Europe, and Asia to captivate audiences with their performances.

After 20 years of show-stopping virtuosity, and countless music albums and videos released, Sonos has established a reputation for having some of the best handbell ringers in the country together with exceptional leadership and musicianship.

Described by the CBC as the “hottest” guitar ensemble in Canada, MG3 has quickly established itself as a force to be reckoned with, as well as an interactive force in various musical forms. For over 18 years, the trio’s virtuosity, rigour, creativity and impressive stage presence have been winning over audiences around the world. The trio, composed of guitarists Marc Morin, Glenn Lévesque and Sébastien Dufour, has given hundreds of concerts in some of the most prestigious venues across North America, Europe, New Zealand and Australia, including the legendary Concertgebouw in Amsterdam and the BB King Blues Club in New York City.

Martha Redbone is one of the most vital voices in American Roots music. A multi award winning musician, the charismatic songstress is celebrated for her tasty gumbo of roots music embodying the folk and country sounds of her childhood in the Appalachian Mountains of Kentucky mixed with the eclectic grit of her teenage years in pre-gentrified Brooklyn. With her gospel singing father’s voice and the spirit of her Cherokee/Choctaw mother’s culture, Redbone broadens the boundaries of Americana. Her latest CD, The Garden of Love- Songs of William Blake, produced by Nitty Gritty Dirt Band founder/Grammy Winner John McEuen is an unexpected twist – “a brilliant collision of cultures” (New Yorker) Martha’s magnificent voice, Blake’s immortal words and a masterful cornucopia of roots music… folk, country, Piedmont blues, gospel, bluegrass, soul and traditional Native.

On the Rocks is the Premiere all-male A Cappella group from the University of Oregon. Since 1999 when Peter Hollens and Leo DaSilva brought modern A Cappella to the west coast, On the Rocks has continued to rise and make music that the public loves. So far, they’ve produced six studio albums, produced multiple viral videos, been featured on NBC’s The Sing Off, gone on numerous national tours, and performed with A-list Artists including Boyz 2 Men and Kid Cudi!
They perform every Friday on the University of Oregon campus and are currently in the process of producing their seventh studio album.

Bandon Showcase has consistently presented high-caliber and talented performances. I would buy a ticket for anything they choose to put on.

I love the diversity of the entertainment, but most important are the “up close and personal” experiences the Showcase allows our students. This is priceless.

Bandon Showcase brings an incredible offering of talent to our little coastal town and provides an annual opportunity for the students of Bandon Schools to experience the arts in a way that cannot be replicated. We are so grateful for all who makes this local experience a reality!

We are so grateful to have Bandon Showcase in our hometown, and we are amazed at the quality of performances that the selection committee has been able to attract. Thank you from two very happy season ticket holders!!